Aflatoxins are incredibly dangerous to our health yet are run rampant on Nigerian farms. RFS is working to change this and leave farmers with a sustainable and realistic solution.

Food systems in sub-Saharan Africa face many obstacles that culminate to challenge the smallholder farmers on their frontlines, and with a population set to double by 2050 and some of the lowest food yields in the world, there is no room for waste.

Food waste doesn’t just come from kids who don’t clear their dinner plates, but in countries like Nigeria where almost 60% of the population was food insecure in 2019, it’s a chronic issue and fungi in the soil are a dangerous culprit. Knowing the risk this poses to food system transformation, the RFS Nigeria team has been working diligently against this threat, and the first step is naming it.

Aspergillus flavus is a pathogenic crop fungus that favours cereals, legumes and tree nuts – some of the most important players in Nigeria’s food systems – and it produces the carcinogenic aflatoxin that is threatening the health of rural people. Aflatoxins are highly common on the continent of Africa and have been found to contaminate up to 65% of maize and groundnuts in Nigeria.

Unfortunately, the conditions found on Nigerian farms are ideal for aflatoxins to thrive as they favour drought and high temperatures to establish, and humid conditions, often found during storage and transportation, to continue to grow post-harvest. Other stressors like insect damage can also weaken crops, leaving them vulnerable to infestation. Since drought events and stress on crops are only expected to become more frequent with climate change, something’s got to give.

The Resilient Food Systems (RFS) Nigeria project, led by UNDP, is tackling the aflatoxin issue in Gombe and Adamawa States by advancing the use of Aflasafe; a product developed by the International Institute of Tropical Agriculture (IITA).

Aflasafe is applied to roasted, sterile sorghum grains which serve as a carrier and food source for the characteristic blue coating that contains the active agents in fighting aflatoxins. The grain coating comprises four native, atoxigenic strains of the Aspergillus flavus fungus which outcompete the toxic strains. 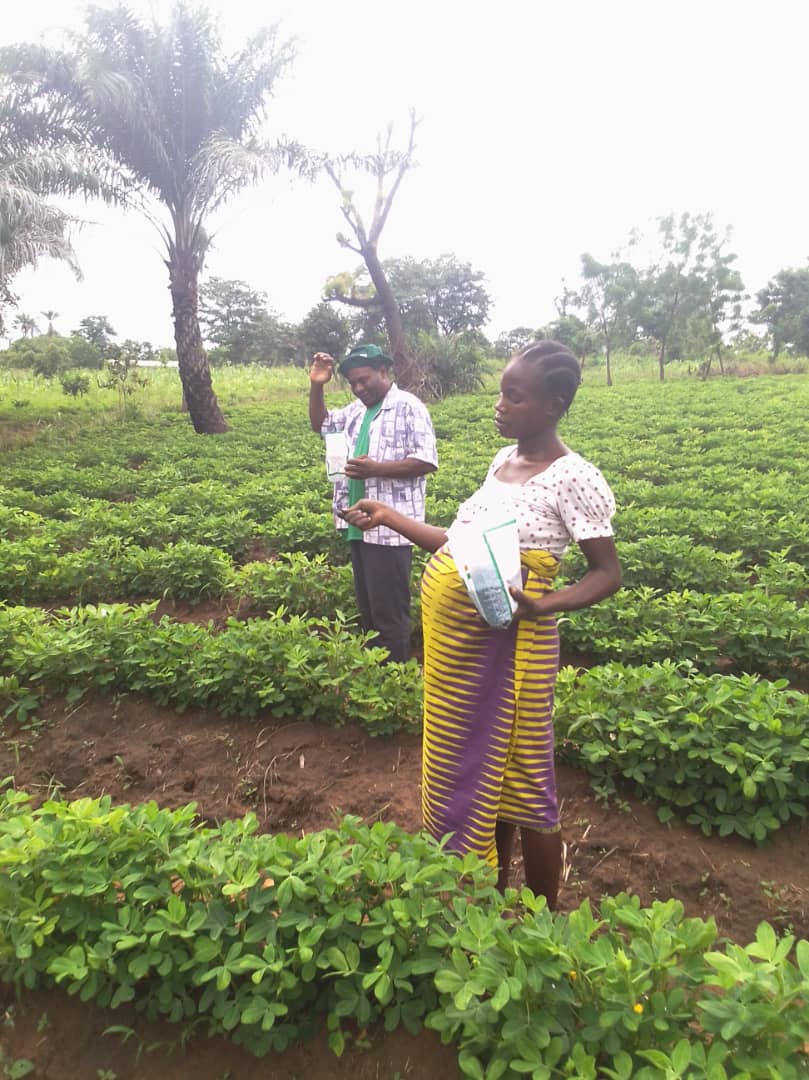 Farmers using the blue Aflasafe seeds on their farms during training in November 2021. Credit: UNDP Nigeria

Aflasafe doesn’t just protect human health, but animal health as well. It cuts chicken mortality by 40% and removes the risk of aflatoxins reaching humans through meat, eggs and milk – the highest-risk animal product to humans.

Accessing local markets have been a barrier to farmers as well since groundnut and maize millers test produce for aflatoxins before purchasing them. All too often, the levels were too high to sell before the introduction of Aflasafe, and farmers are now reporting an increase of up to 25% in their sales under the RFS Nigeria project. Moreover, their food value chains are opening to international markets by reducing contamination to safe-to-eat levels by 80-100%.

To extend the benefits of this aflatoxin solution into their project states, the RFS Nigeria team has been working with communities, holding information and training sessions, and have so far provided Aflasafe to 8034 beneficiaries, 59% of whom are women, who are seeing the benefits on their farms. Since it is a low-cost solution – between 12 and 25 USD/ha to apply – it is also a long-term solution for farmers who enjoy higher yields and higher returns on investment.


“Now we get corn and groundnut more than before, and it’s more healthy. Then when we eat or use it to cook, there are no problems.” - Johnson Bamargi, Farmer in Adamawa State

At a 2019 training for North-eastern Nigerian extension agents in Gombe state, facilitators communicated Aflasafe application regimes, stressed the importance of combatting aflatoxins and described best practices for reducing crop contamination. While proper handling, storage and raised awareness were all cited to contribute to reducing aflatoxins, the RFS Nigeria project is cutting the dangerous fungus off at its source.

Food systems transformation is a health issue which is why RFS is always invested in finding innovative solutions to increase yields and introduce safe food options to sub-Saharan Africa’s future.

See for yourself the difference Aflasafe is making in Adamawa State in the clip below; part of the new video series from RFS Nigeria, available on our YouTube channel.