Community members in Nceka, Eswatini use gabion technology to transform a wasteland into a green, productive landscape.
25 October 2021

Fixing erosion, stone by stone: the power of integrated approaches in Eswatini

But what do integrated approaches look like in practice?

To illustrate what we mean by “integrated” approaches, it’s easiest to look at what RFS country project teams are doing in the field. In this blog post, we explore an example from Nceka, a small community located in the Lubombo region in the eastern part of Eswatini. 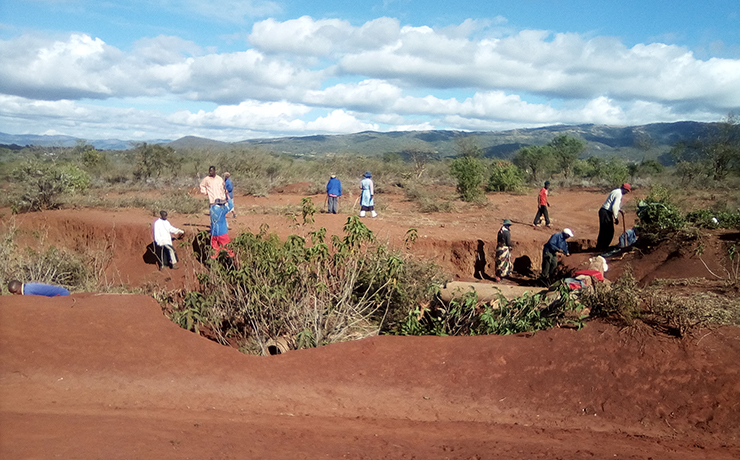 Farmers clear out the gully before construction of the gabions. In recent years, the gully has gotten wider and deeper, in some places preventing road access.

Erosion in Eswatini is a serious problem that has worsened over the past 20 years. In a country where almost three-quarters of the population depends on subsistence farming for a living, erosion impacts local communities in a very direct way.

In Nceka, soil erosion and heavy rains created deep gullies in the soil. These gullies obstructed access to central roads in the community, preventing travel. Heavy rainfall sent topsoil flowing into the Mhlatuzane River, causing a build-up of sediment and clay in the Lubovanne Reservoir – a crucial water source for 12 000 households.

As the gullies increased in size, it was clear something had to be done.

In the past, rural communities have seen conservation efforts as the responsibility of the government. But decision-makers have come to realise that community participation and ownership is essential to the success of land restoration.  Locals who live on the land need to see the concrete benefits of restoration projects to ensure the long-term sustainability of the intervention.

When the Government of Eswatini, in partnership with the RFS project team, approached the community about a potential land restoration intervention, the community members collectively identified the gully problem as a key priority. They realised that if the gullies were not fixed, and the land restored, the area would eventually become uninhabitable. 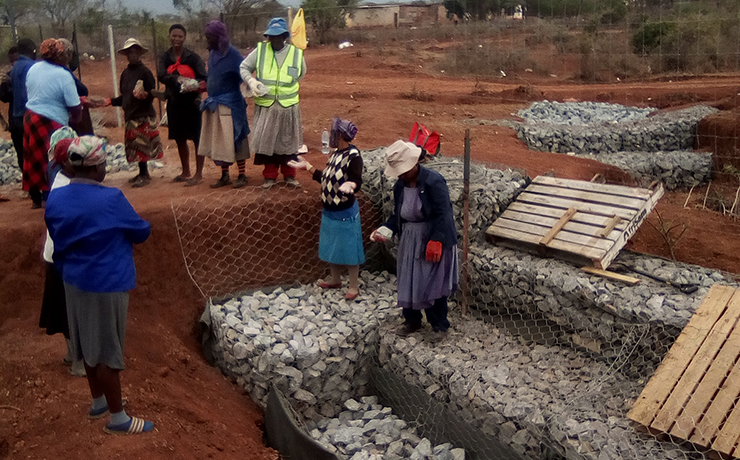 Once the gabion structures were constructed, community members filled the metal cages with rocks to plug the gullies.

Healing the land and empowering a community

This bottom-up momentum led to the birth of the Sikhunyane Land Rehabilitation project funded in part by the RFS programme.

Facilitators from the community received training in how to make gabions, which are cage-like structures that house stones or other heavy materials. The gabions are used to plug gullies to stop rainwater from making the holes even deeper and wider.

A dedicated erosion control group was established, consisting of 9 women and 5 men, to oversee and implement the groundwork. Gabions need to be at least 300mm below the original depth of the gully to make the plug more efficient. This meant the community had to do excavations with picks and shovels. The erosion control group did the heavy lifting, gathering the stones that go into the gabion cages themselves. Once the gabions were placed in the gully, they were filled with stones, and great care was taken not to distort the frames.

Working together to solve a collective problem, one that had plagued the community for years, brought the community members closer together. “Rehabilitating this land will not only help us feed our families, it also created a bond among us as neighbours,” said Hleziphi Ndlangamandla, a member of the erosion control group. Ms Ndlangamandla said she could not help but feel empowered working side by side with her community. 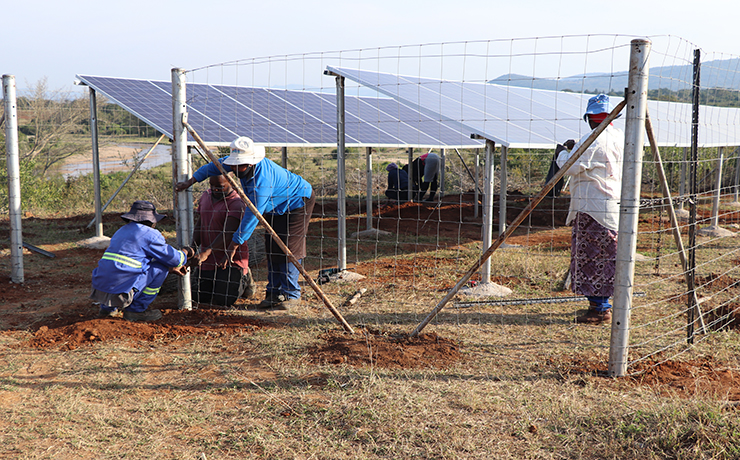 Even though the gullies were successfully plugged, Ms Ndlangamandla’s work isn’t over.

Because the community viewed the problem through an integrated lens, they were pushed to consider the challenge (gullies) and immediate solution (gabions) within the broader socio-economic and ecological system. Using a holistic approach, this singular intervention will catalyse multiple co-benefits within the community.

Once the erosion is contained and the area recovers, members of the erosion control group will plant vegetables and fruit trees, creating new sources of nutritious food for household use and for sale. It is essential that the crops match the suitability of the soil to prevent further erosion down the line. The new indigenous trees will improve surface cover (a further safeguard against erosion), contribute to the community’s natural carbon sinks and promote biodiversity.

The land rehabilitation site lies on the left bank of the Mhlatuzane River, which is the only known source of water in the area. To provide irrigation for the new vegetable garden and fruit trees, the rehabilitation project is building a solar-powered water supply system that pumps water directly from the river.

Understanding the role long-term capacity building plays in the sustainability of an intervention, the RFS project will provide the community with ongoing training to help them manage the site. The erosion control group will be taught repair and maintenance skills as well as facilitation skills to help relay their new knowledge to others. 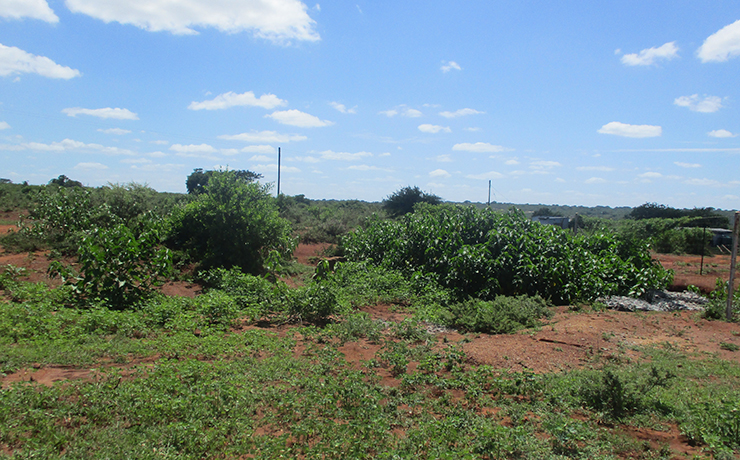 After several months, what was once a dry hole in the ground is a green oasis. Soon, the community will plant vegetables and harvest food from the land.

The community members are overjoyed with the progress that’s been made so far. “It’s amazing how this land that we thought would never be of use to anyone will now produce food again,” said Nonophile Dlamini, a farmer from the community.

Through simple stone and metal gabions, the example of Nceka shows us how integrated approaches and close community engagement can catalyse transformations not only in landscapes, but in the mindsets of communities. Witnessing the fruits of their labour, community members are establishing a connection with nature and reflecting on their role within the landscape – many for the first time.

As new vegetation begins to grow on land that was once a wasteland, Ms Zwane knows that their hard work was not in vain. “This land has become our ‘bread’ forever, as long as we continue taking care of it,” she said.