As climate change threatens the future of rainfed agriculture in much of Africa, Burundian’s are adapting through investments in new hill irrigation networks. With support from the RFS programme, the new infrastructure has improved yields and extended the growing season.

Burundi is a landlocked country whose economy depends largely on subsistence agriculture. It is estimated that 90 percent of the population are small-scale subsistence farmers.

Burundi’s agriculture is heavily dependent on regular rainfall, but due to climate change, rainfall has become unpredictable and irregular. Droughts are becoming an ever more frequent occurrence during what would normally be the rainy season.

To mitigate against the shortage of water, the RFS Burundi project, implemented by FAO in partnership with the Government of Burundi, is rolling out small-scale irrigation infrastructure to help farmers adapt to climate change. This initiative will enable farmers to grow crops during the dry season, something that would otherwise be almost impossible.

The initiative consists of two hill irrigation networks: one extends over 4 km and irrigates an area of 250 ha on Rwingiri Hill, and the second network covers an area of 1,6 km and irrigates 80 ha on Nyamurenge Hill. The networks also irrigate an additional 60 ha of land as part of a rehabilitated area surrounding the micro-hydro-agricultural dam.

Hill irrigation networks capture spring water at top of a hills and circulate water through canals down the slopes. Farmers can access water by connecting to nozzles at various points in the network. 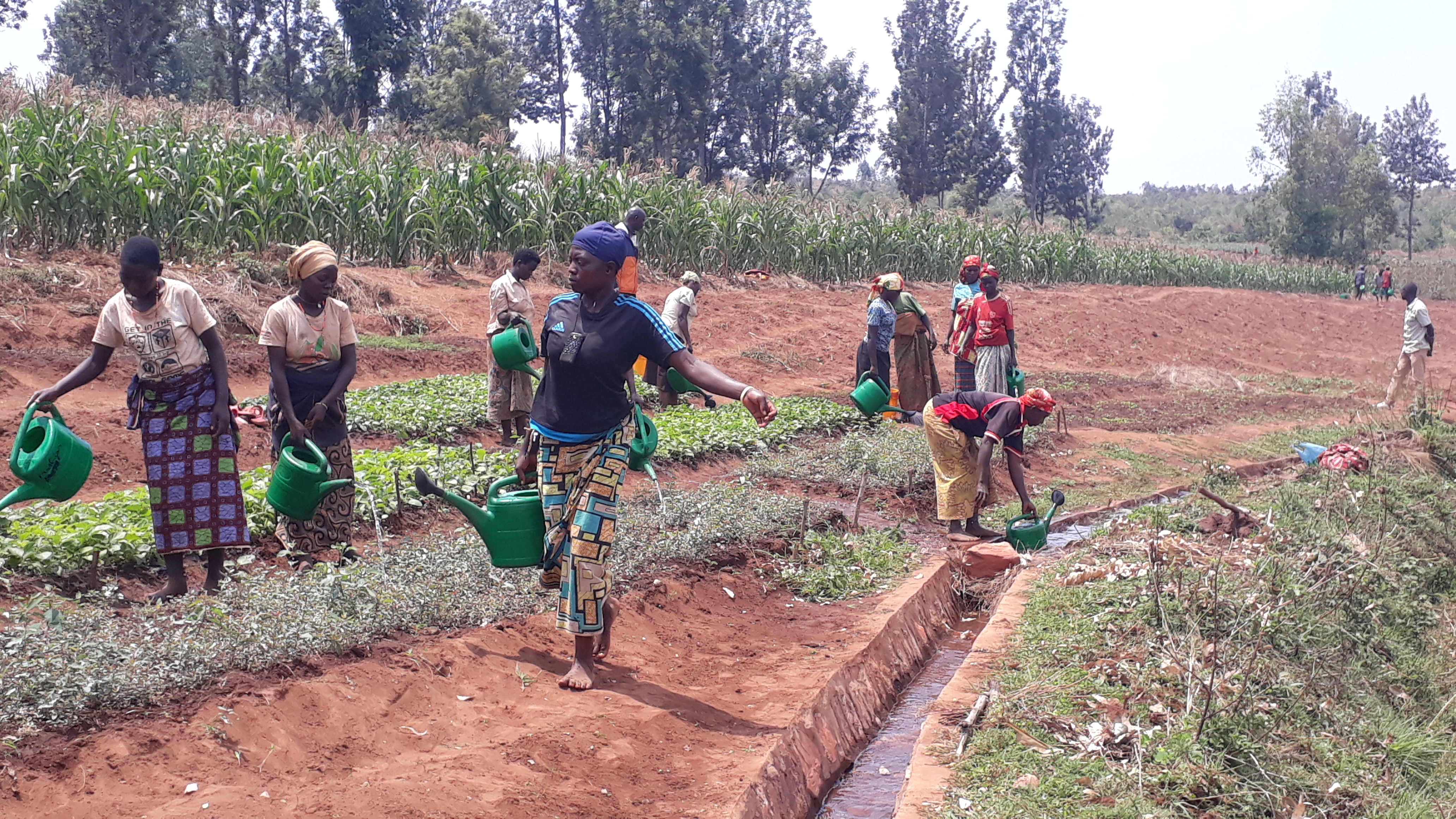 Canals bring water down from Nyamurenge Hill to 80 ha of farms below. The new irrigation system has allowed farmers to grow staple crops, like maize and beans, during the dry season.

More than 567 households in the area are benefitting from the new irrigation infrastructure. Thanks to this initiative, their yields have increased. Maize yields have almost doubled, from 2.1 t/ha to 4 t/ha in less than a year.

What’s more, farmers can now also produce corn, potatoes, cabbage, and eggplant all year round. Selling these vegetables during the off-season has led to increased incomes for the community. The local farming cooperative was able to make an additional USD 2,200 from the sale of off-season produce this past year.

One such farmer is Silas Ntahondereye (34), a husband and father of four children. In the past, Silas struggled to feed his family, as the yields from the local varieties of maize, beans, cassava and a few avocado plants were meagre. He only managed to produce enough crops for home consumption, and there was no surplus to sell at the local market. 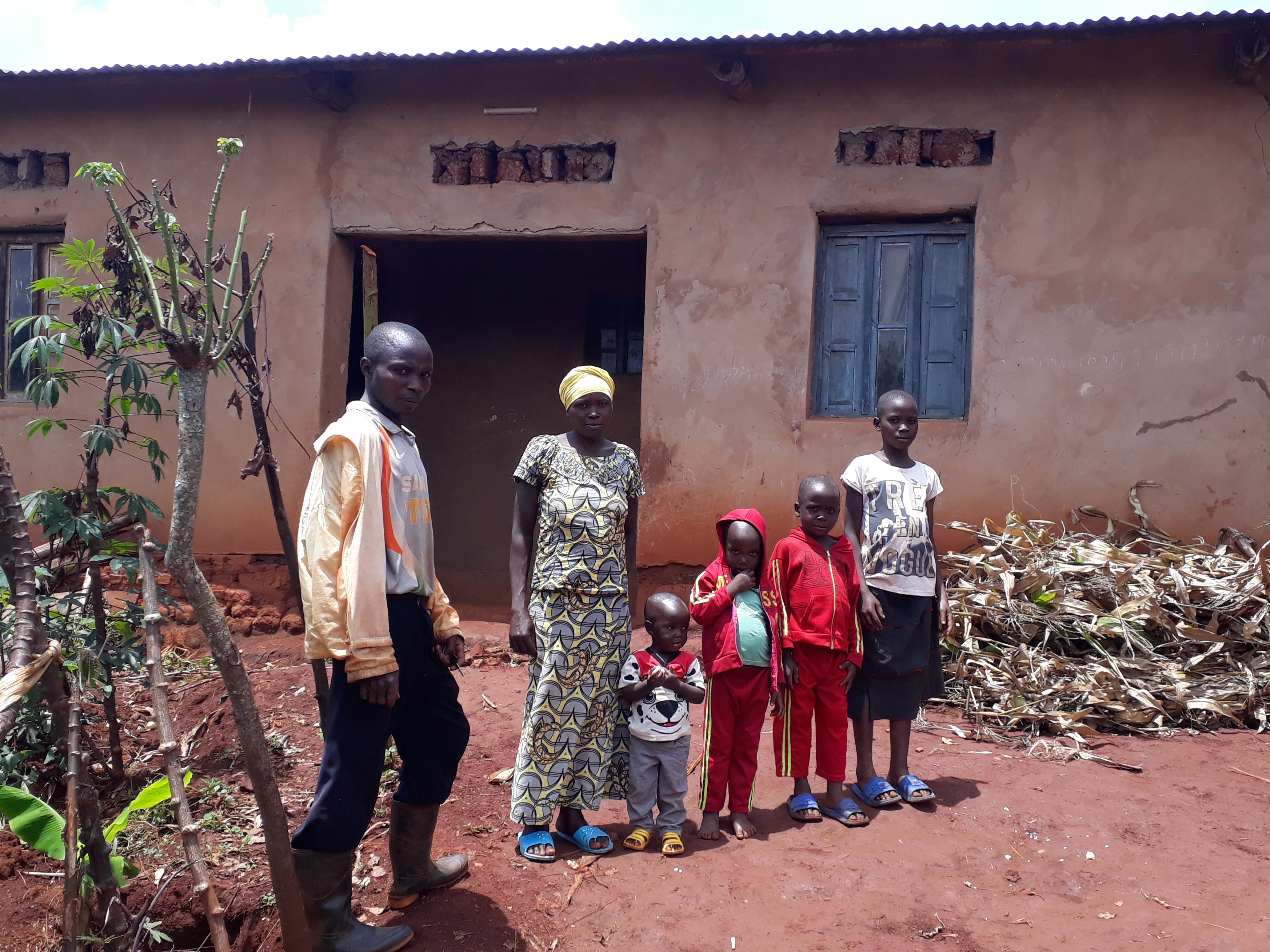 The solar panel Silas purchased with his new income from maize and bean sales at the local market keeps the lights on at his family home.

Silas joined the Farmer Field School (FFS) in his area where he learned how to source more resilient and productive seed varieties and apply conservation agriculture techniques on his farm.

Supported by the RFS project, the Farmer Field Schools train Burundian farmers to use more sustainable farming practices that combat soil erosion through contour planting and agroforestry. Farmers also learn to apply new techniques to conserve water and make the most of the new hill irrigation systems. The FFSs allow farmers to observe methods first-hand, experiment and collaborate with their peers to solve problems that are unique to their community.

Thanks to the FFS training and availability of water from the irrigation network, Silas increased his maize yields from 70 kg/ha to 1000 kg/ha and bean yields from 90 kg/ha to 800 kg/ha. He now sells his surplus to the local market. This provides him with much-needed income to increase the standard of living for himself and his family.

From the income generated from his improved farming practices, Silas acquired four additional lots to expand his maize and bean production. He also bought a cow, motorcycle and solar panel for his home. The motorcycle enables him to deliver his vegetables to the market, and the solar panel provides his household with off-the-grid electricity.

Silas’s increased yields have created a virtuous cycle that has improved his and his family’s livelihoods, making them more resilient to withstand future challenges.