With the new conservation agriculture techniques, Mfembi Ndlangamandla’s maize harvest has improved over the span of just one year.
31 August 2020

In eSwatini, lead farmers are key to scaling up conservation agriculture practices throughout the country

The RFS eSwatini project has been building capacity of smallholder farmers and providing them with the necessary resources to scale up Conversation Agriculture practices. After good rains this year, many of the farmers are starting to see results.

Mfembi Ndlangamandla is excited by his maize harvest this year.

Since he was selected to be trained as a lead farmer by the RFS eSwatini project, he’s been better able to provide for his family. Mfebmi is elderly, and in a wheelchair, but armed with new knowledge on conservation agriculture, he is inspired to refine his skills and keep improving his crops year after year. “Even though some of the crops that were provided [by the project] did not germinate well, I look forward to the next season where I hope to improve even further,” he said. 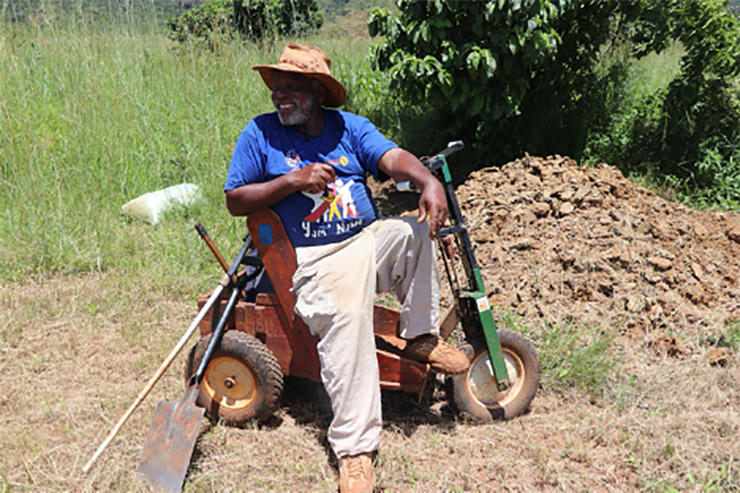 Mfembi Ndlangamandla gives the RFS project team a tour of his farm.

Like many African countries, eSwatini faces the interrelated challenges of rural poverty, food insecurity and environmental degradation. FAO predicts that between October 2019 and March 2020, around 25 percent of the rural population are likely to experience severe food insecurity due to dry spells, high food prices, and increasing unemployment.

To address these challenges, the eSwatini government, through the Resilient Food Systems programme, has introduced a paradigm shift toward integrated (and participatory!) natural resource management at the local level. This planning approach aims to ensure land, water and other natural resources are sustainably managed and harnessed as key drivers of growth for rural communities.

Key to this transformation is the scaling up of more sustainable and productive agricultural practices for the million people that rely on subsistence farming for their livelihoods—over 70% of eSwatini’s population.

The Food and Agricultural Organisation of the United Nations (FAO) describes conservation agriculture as a farming system that can prevent losses of arable land while regenerating degraded lands. Conservation agriculture promotes the maintenance of permanent soil cover, minimum soil disturbance, and diversification of plant species, which encourage healthy soils in order to develop sustainable crop production systems that are resilient to the effects of climate change.

To support the adoption of conservation agriculture techniques, the RFS eSwatini team conducted a training programme in the Manzini, Lubombo and Shiselweni regions. Within each constituency, the RFS eSwatini team selected 10 farmers to be trained and supported as lead farmers within their communities, with a particular emphasis on developing the capacity of women and elderly farmers. Led by the Chiefdom Development Unit, these farmers went through vigorous theoretical and practical training.

Held at demonstration plots in each chiefdom, the practical training sessions centred around a learning-by-doing approach and encouraged experimentation. Farmers were able to apply the conservation agriculture approaches and techniques learned in the classroom, such as minimal soil disturbance and intercropping, in a field setting and see tangible results.

Like Mfembi, the farmers were provided with start-up packs of organic fertilisers and seeds, such as maize, jugo beans and peanuts. The seeds were planted during the first rains of the planting season in December 2019 and were harvested in July of this year.

According to the RFS project team, the lead farmer approach really works, particularly with women-led farms. To encourage knowledge sharing and project scale, each lead farmer has four followers – they call them ‘their children’ – whose fields they monitor and with whom they share advice. Some of the lead farmers admitted their followers don’t always listen to the advice on conservation agriculture, and plant entire fields of maize. But, they say, these are the farmers that come asking for legumes when maize doesn’t survive the drought.

As crop yields improve, the lead farmers are becoming increasingly popular. Visible, tangible results mean the benefits of conservation agriculture are becoming more apparent to eSwatini’s smallholder farmers. As leaders within their community, the lead farmers will continue to play a critical role in spreading valuable information and training to other farmers long after the project is over, doing the hard work on the ground to improve the livelihoods of eSwatini’s most vulnerable.